Human exposure to heavy metals has risen dramatically in the last 70 years. Many of the elements that can be considered heavy metals have no known benefit for human physiology. Lead, mercury, and cadmium are prime examples of such "toxic metals."  These toxic metals have an adverse effect on brain function, enzyme systems affecting energy production, and even blood pressure. Toxic metals also affect cognitive function and memory adversely.

Exposure to metals may occur through the diet, medications, environment, or in the course of work or play.

At Wdowin NMD, where heavy metal toxicity is suspected, we believe that time spent to perform a thorough dietary, occupational, and recreational history is time well spent, since identification and removal of the source of exposure is frequently the only therapy required.

AM I AT RISK FOR HEAVY METALS?

Everyday our bodies come in contact with hundreds of harmful chemicals. During our hot morning shower we breath in water vapor that contains toxins like arsenic and chlorine. During the day we get pesticides on our food and the food additives in our food. Most of us apply creams or make ups that contain parabens and/or heavy metals on our skin. You say that you don’t do any of this? I’m sure you still breath the air.

TODAY’S EXPOSURE MAY COME FROM:

Check out the following list of chemicals that are released into a six-mile radius around the zip code of 92625. Due to their volume and toxicity, they have to be reported to the EPA. 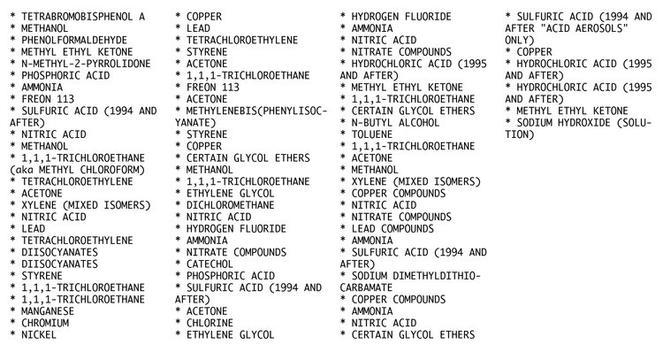 Chelation therapy is an effective and safe way to remove metallic irritants, allowing leaky and damaged cell walls to heal.  intravenous Calcium Disodium EDTA is one of the popular modalities for the removal of toxic metals, especially for lead from the body. When we test our patients for toxic metals such as aluminum, lead, mercury, and cadmium, we find that many people have elevated levels of these toxic elements present in their systems.

A typical treatment cycle may include ten to twenty injections or infusions spread out over ten to forty weeks.  Practitioners typically recommend at least ten to twenty treatments to start; however, some may recommend continued therapy for up to a hundred treatments over a period of several years.

It is important to receive chelation therapy from a knowledgeable practitioner because chelation removes both heavy (ex mercury and lead) metals as well as some important minerals (ex zinc and iron) from the body.  Deficiencies of zinc and iron can lead to a number of health concerns so when performing chelation our patients receive high-dose vitamin and mineral supplements during treatment.

EDTA is safe and is also an FDA approved medical therapy for removal of these toxic substances. Chelation therapy was first introduced into the US in 1948 as a treatment for the lead poisoning of workers in a batter factory.  Shortly thereafter, the US Navy advocated chelation for sailors who had absorbed lead whole painting government ships and facilities.

WHAT MAY BE SOME OTHER BENEFITS TO EDTA THERAPY?

Many people are looking for alternative treatment options to angioplasty, surgery and drugs to treat their heart condition. Chelation therapy is a promising treatment shown to reverse heart disease and atherosclerosis.

Chelation for heart disease involves the intravenous infusion of vitamins, antioxidants and a chelating agent known as EDTA. This mixture serves to chelate, or bind, toxic heavy metals, calcium, and free radicals in blood vessel walls, which are then excreted in the urine. As a result, blood vessels become more pliable and circulation improves, which leads to the reduction or elimination of chest pain and other symptoms of vascular disease. Patients who have completed a course of chelation therapy often notice an improvement in energy and well-being and are often able to reduce or eliminate their need for medication. In an analysis of more than 20,000 patients receiving chelation therapy, 87% had measurable improvement in parameters such as exercise tolerance, walking distance and cardiogram results.

Chelation therapy may also be more beneficial than surgery for patients with blockages in their legs known as peripheral vascular disease. Joseph Holliday, M.D., a vascular surgeon, demonstrated that those who underwent chelation therapy needed less rest, had less pain, could walk farther and did not require amputation when compared to those who had bypass surgery.

Studies such as these suggest that EDTA chelation should be strongly considered for patients with all forms of cardiovascular disease.

Chelation therapy with EDTA can help remove aluminum from the brain, a metal that contributes to Alzheimer’s Disease. According to Drs. H. Richard Casdorph and Morton Walkers, authors of “Toxic Metal Syndrome: How Metal Poisoning Can Affect your Brain”, chelation therapy has been shown to help in patients with early-stage Alzheimer’s. It has also been documented as showing greater clarity, improved memory, and increased IQ.

Does inorganic mercury play a role in Alzheimer's disease? A systematic review and an integrated molecular mechanism.

It has been suggested that chelation therapy helps to control free radicals which are linked to the cell destruction that can lead to cancer. Walter Blumer, MD of Switzerland conducted a study which started in 1958 and investigated 231 adults who lived near a well-travelled highway. Living near this highway had a higher rate of cancer deaths than people in the same city who lived in areas with less traffic. It was speculated that the higher rate of cancer was linked to the greater exposure to lead form the automobile exhaust.

Current studies show that all US residents carry a Body Burden of toxins. This Body Burden is the collection of toxins over the years of life that has been stored in the tissues and organs of the body.

The best way to protect your health and the health of your loved ones is AVOIDANCE, unfortunately you can’t avoid everything.

At Wdowin NMD our practitioners will teach you how to protect yourself while still enjoying life.

Behind any discussion of sexual problems lies an incredibly loaded question: Exactly what is normal, healthy sexual response and function?