Does estrogen cause breast cancer?

The true answer is that it depends. Are we referring to synthetic estrogens which our bodies do not recognize as our own hormones, or are we discussing bioidentical estrogens, which are precise copies of the hormones which our bodies make?

If we are talking about synthetic estrogens, then yes – Estrogen can increase the risk of breast cancer…but perhaps by not as much as you think.

These types of numbers are mathematically calculated to give some sort of relevance, and in this case, it is called the relative risk.

This would be a good time to illustrate the relative risk of other factors in relation to breast cancer, so that we can put this number into perspective. The table below shows various relative risks that most of us don’t consider in our lives. 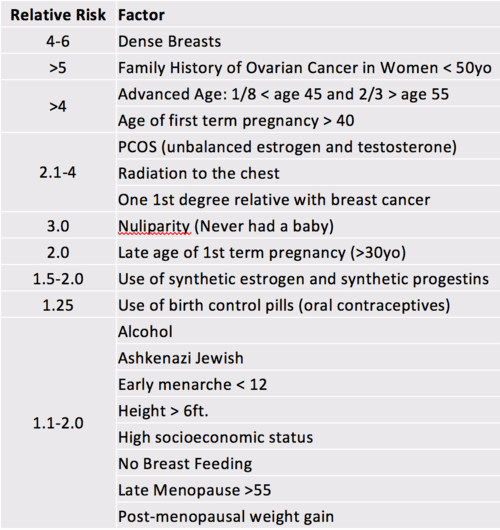 From the table above, we can already see some interesting trends and figures:

The use of birth control pills (which are combinations of synthetic estrogens or progestins) increases risk of breast cancer by 25%
Having a baby over the age of 30 increases the risk of breast cancer by 200% while having a baby over the age of 40 increases risk of breast cancer by 400% - and never having baby increases the risk of breast cancer by 300%
Drinking alcohol before the first term of pregnancy increases breast cancer risk by 50%
This perspective is not to say that there is some sort of acceptable risk. What this does mean is that data that does exist which supports estrogen’s use in women seems to be largely ignored or misunderstood leading to an overtly cautious position in the discussion regarding the topic of hormones, cancer and women’s health. It should be noted that the avoidance of estrogen due to fear of prescribing estrogen has led to a calculated premature death of 18,000 to 91,000 women following the 10-year period starting 2002 after the publishing of the WHI study, [which caused many physicians and patients to be afraid of estrogen]. The excess in mortalities have been attributed to acute myocardial infarctions (heart attacks) and breast cancer. (Am J Public Health. 2013 July: e1-e6. Sarrel P el al.)   Furthermore, as far as the current literature stands, studies suggest that estrogen use in women with a family history of breast cancer is not associated with a significantly increased incidence of breast cancer, but is associated with a significantly reduced total mortality by 50% (Ann Intern Med. 1997 Dec; 127(11):973-80. Sellers TA et al.)

This is not an advocacy for the use of synthetic estrogens. Quite contradictory, the advocacy is for the use of medications and hormones with risk as close to zero as possible, while providing as much benefit as possible. The use of bioidentical hormones with estradiol and progesterone, according to the E3N French cohort of 80,377 postmenopausal women followed from 1990-2002 has shown that there is no increased risk of breast cancer. (Fournier, A., et al.  Unequal risks of breast cancer associated with different hormone replacement therapies:  results from the E3N cohort study.  Breast Cancer Res Treat, 2008; 107: 103-111)

Another study looking at the risk of breast cancer by type of menopausal hormone therapy also found that there is no increased risk of breast cancer among women who used bioidentical estradiol and progesterone, while the relative risk for those who used synthetic progesterone (progestins) ranged from 1.57 up to 10.4 depending on the type of synthetic progestogen used.

And so, the question (Does Estrogen Cause Breast Cancer?) begs another answer. If we are discussing bioidentical estrogens when used with bioidentical progesterone, which are precise copies of the hormones which our bodies make, then the research seems to pointing to one answer – NO!

Behind any discussion of sexual problems lies an incredibly loaded question: Exactly what is normal, healthy sexual response and function?