Behind any discussion of sexual problems lies an incredibly loaded question: Exactly what is normal, healthy sexual response and function? Each person has his or her own standard of what sexual health or satisfaction is, based on his or her individual culture, background, personal sexual experiences, and biological makeup. This individual variation seems to be especially strong among women.

HOW ARE PROBLEMS DEFINED?

Sexual response is usually described as having four phases: desire, arousal, orgasm, and resolution. Likewise, sexual problems are often discussed in terms of these phases, so that interest in sex (desire) is understood to be different from the physical changes the body undergoes in anticipation of sex (arousal), both of which are different from the experience of the sex act itself (response/pleasure/orgasm). While all of these phases are related and sexual problems can include elements from more than one phase, different factors can be involved in problems at each phase.

What is desire? Sexual desire is your interest in sex and in being sexual. It has three interrelated components:

Beliefs, values, and expectations about sexual activity. Your natural drive may be tempered by your personal attitudes toward sex, which are shaped by your culture, your religious beliefs, your family, your peers, and media influences. The more positive your attitudes are about sex, the greater your desire to be sexual.

Motivation. This component involves your willingness to behave sexually at a given time and with a given partner. Because it is driven by emotional and interpersonal factors, motivation is the most complex component of desire—and is increasingly recognized by experts as perhaps the most important. Generally speaking, a caring relationship is often required for most women to experience desire.

Desire usually (but not always) wanes with age. In general, sex drive decreases gradually with age in both men and women, but women are two to three times more likely to be affected by a decline in sex drive as they age. Reduced sex drive becomes much more common in women starting in their late 40s and 50s. The effect of age also differs by individual: some women experience a big decrease in sexual desire beginning in their midlife years, others notice no change, and a few report increased interest in sex at midlife. Those women whose desire increases may feel liberated by their new freedom from contraception or by newly found privacy if their children have recently left home.

During the menopause transition, the physical effects of falling estrogen levels—including hot flashes, night sweats, and vaginal dryness—can undermine sexual motivation and drive. Although not directly related to menopause, the age-related decrease in testosterone may reduce desire in midlife women, as this hormone plays a role in women’s sex drive and sexual sensation. The precise role of testosterone in desire is complex, however, because low sexual desire in women has not been shown to be related to testosterone levels in scientific studies. Also, some women who undergo an abrupt menopause (caused by removal of both ovaries or by chemotherapy), which leads to an immediate drop in both estrogen and testosterone, suffer a greater reduction in desire than women who experience natural menopause. Interestingly, other women in the same situation do not have a decrease in desire.

What is arousal? Arousal involves the physical signs of sexual readiness. Blood flow to the genitals increases, causing the labia, clitoris, and upper vagina to swell. The vaginal lining becomes moist, providing lubrication. The vagina grows longer and the inner and outer labia pull apart, exposing the vaginal opening. Breathing and heart rate speed up, muscles tense, and nipples grow erect. You are ready for sex!

Although sexual desire often triggers arousal, for many women, particularly after menopause, sex drive may no longer be the first phase of sexual response. Instead, desire will follow arousal. Arousal may occur first, resulting from seduction or suggestion by your partner. Arousal also can come from a conscious decision to respond to your partner’s approach.

The changes in hormone levels and vaginal changes can significantly affect arousal in midlife women. The vaginal atrophy and dryness associated with low estrogen can cause arousal to take longer or be harder to achieve. In fact, the first noticeable change associated with menopause is often reduced vaginal lubrication during arousal. Less estrogen results in reduced blood circulation to the vulva, the clitoris, and the vagina.

Many of the age- and menopause-related hormone changes and vaginal changes that can dampen arousal around midlife can also affect women’s enjoyment of sex and ability to achieve orgasm. Here again, the vaginal atrophy and dryness related to low estrogen play a role, as does reduced blood supply to the clitoris and lower vagina. Also, the clitoris—a key center of sexual pleasure for most women—is likely to be less sensitive than in earlier years, possibly due to reduced estrogen levels and changes in the vascular and nervous systems.

All of this may mean some reduction in the sensations and pleasure you experience during lovemaking. It also can affect orgasm, which may be less intense, take longer to achieve, or rarely happen at all. If you are troubled by a consistent difficulty or delay in reaching orgasm, or a consistent inability to reach orgasm after adequate stimulation, you may have what has been called "female orgasmic disorder."

The experience of sex as anticlimactic and less pleasurable is likely to dampen desire over time. This makes it easy to see just how interrelated sexual problems can be.

As estrogen levels fall as women approach and pass menopause, the resulting dryness and thinning of vaginal tissues can cause penetration and intercourse to be uncomfortable for many women. The discomfort can range from a feeling of dryness to a feeling of vaginal “tightness” to severe pain during sex. After sex, some women feel soreness in their vagina or burning in their vulva or vagina. Over time, and without treatment, the inflammation that may result from infrequent sex without sufficient vaginal lubrication can lead to tearing and bleeding of vaginal tissues during sex.

This is one of the main reasons why between 17% and 45% of postmenopausal women say they find sex painful, a condition referred to medically as "dyspareunia." Vaginal thinning and dryness are the most common cause of dyspareunia in women over age 50. Be aware, however, that pain during sex can also result from vulvodynia (chronic pain in the vulva, or external genitals) and a number of other causes not specifically associated with menopause or aging.

Beyond the immediate effects of the pain itself, pain during sex (or simply fear or anticipation of pain during sex) can trigger performance anxiety or future arousal problems in some women. Worry over whether pain will come back can diminish lubrication or cause involuntary—and painful—tightening of the vaginal muscles, called vaginismus. The result can be a vicious circle, again highlighting how intertwined sexual problems can become.

SEXUAL PROBLEMS AND ACTIVITY BY THE NUMBERS

The previous pages in this section discussed how common individual sexual problems are among women at midlife and beyond. Taken together, scientific studies suggest that between a third and a half of peri- and postmenopausal women experience one or more of the sexual problems discussed earlier. The important question of how frequently these problems are bothersome to women has only recently been thoroughly examined, and studies often have varying findings because of differences in the way they are conducted. However, it is clear that while all sexual problems are more common in older women (ages 65 and over), distress from these problems is more widespread in women at midlife (ages 45 to 64) and declines in later years.1

Sexual problems go unreported. Despite how often women are troubled by sexual problems, most women don’t discuss these problems with their healthcare providers. In a survey of US women ages 57 to 85, only 22% reported that they had discussed sex with a physician since they had turned 50.

A more recent study looked specifically at whether and how women seek help from their healthcare providers for sexual problems. This study involved more than 3,200 women ages 18 or older who reported problems of sexual desire, arousal, and/or orgasm that they found troubling. Just over one third of these women sought out help for their sexual problem from a healthcare provider, usually a gynecologist or primary care physician. About 80% of the time, it was the woman, rather than the provider, who started the discussion about the problem.

If you had to choose one word to describe women’s sexual function and sexual health, you’d be wise to go with “complex.” The factors that contribute to women’s sexual health and satisfaction—as well as to their sexual problems—are many, and they are often interrelated. These factors range from the physical changes of menopause and aging to a woman’s physical health, her cultural and religious standards, issues in her relationship, her self-image, and stress and lifestyle issues.

While the number of potential causes of sexual problems during menopause can seem overwhelming, there are just as many strategies and treatments for overcoming them. These include self-help measures you can adopt on your own, counseling with or without your partner, and prescription therapies or resources that your healthcare provider can direct you to. And these interventions, when properly used, have been shown to be both safe and effective in young, old, and all ages in between. 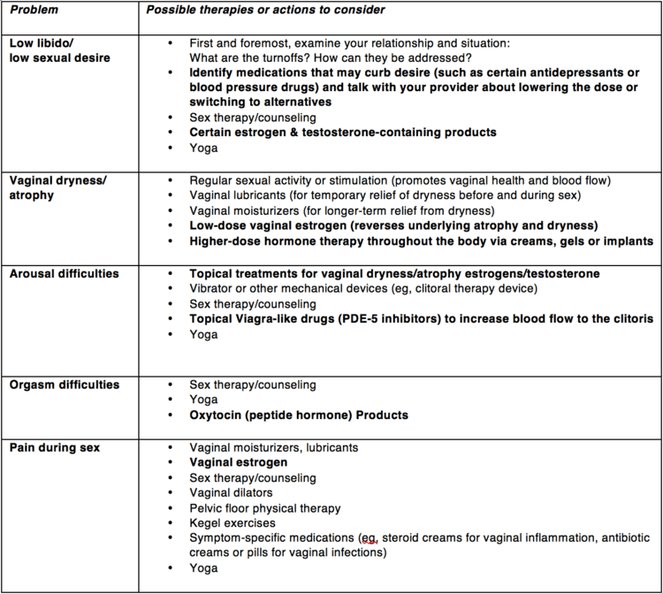 Many women are affected by hair loss. In fact, around 40% of women by age 50 show signs of hair loss and less than 45% of women actually reach the age of 80 with a full head of hair.